We offer in-story information as well as gameplay guides.

Geneforge is a series of isometric role-playing games revolving around the Shapers, their Creations, and the Outsiders that make up both Shaper society and potential allies and foes.

For the first three games you always play a Shaper who can specialize into one of three classes (collectively referred to as "Shaper" by outsiders) : Guardian, Agent, and Shaper. For the fourth game you play as a Rebel and for the fifth as an Outsider. In each of the games, there are multiple factions you can join, or not, to finish the game.

Gameplay takes place on an isometric board. Outside of battle, all monsters and NPC's move around as you do, but battle takes place in rounds where each monster gets a set number of action points.

The storyline of the series revolves around Shaping, a technique that allowed the earliest Shapers to directly edit the genetic code, genes, of their creations and themselves. Gaining incredible powers with this technique, the Shapers soon took control of Terrestia and established their total rule over it. However, with some Outsiders getting angry and jealous against the Shapers, Shaper secrets getting found and stolen, and some Creations getting intelligent and breaking free of Shaper control, a Rebellion against the Shapers soon started to take form.

To write a new article, just enter the article title in the box below.

Not sure where to start?

The Geneforge is a device that gives different powers to the user. It made the user incredibly powerful, but their minds are usually not able to handle the power. causing mental instability and quick anger. 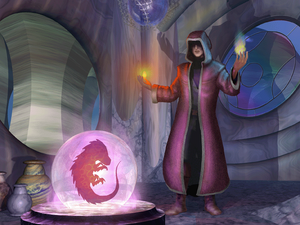 Retrieved from "https://geneforge.fandom.com/wiki/Geneforge_Wiki?oldid=8811"
Community content is available under CC-BY-SA unless otherwise noted.